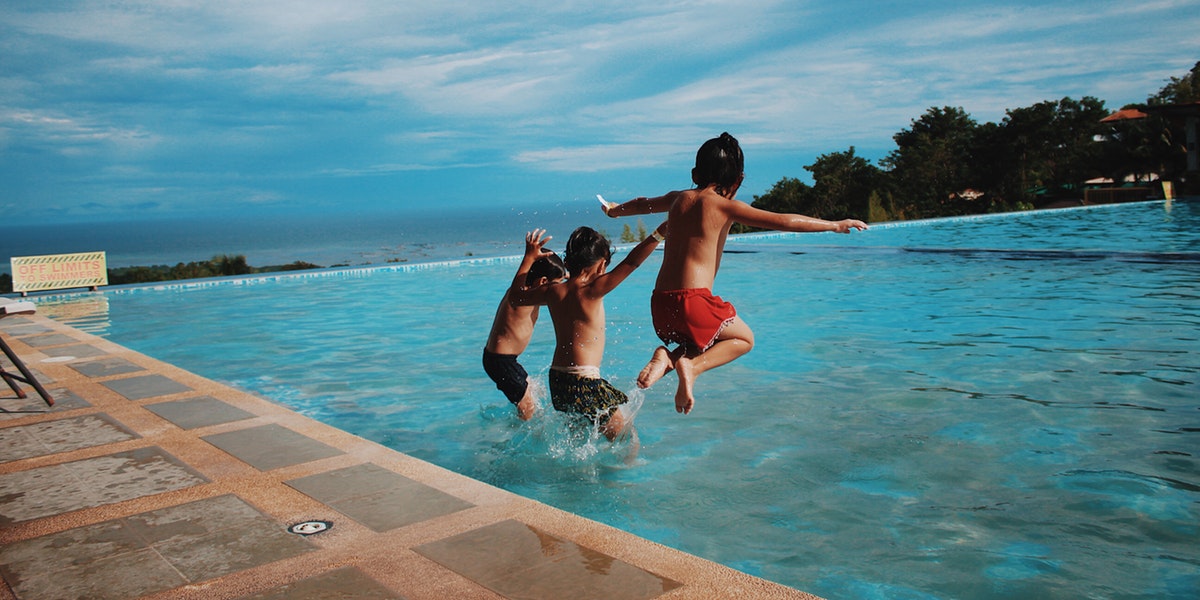 24 Jun Does Chlorine Kill Lice? Can My Child Catch Lice from a Swimming Pool?

Now that it’s summer, we have many families asking if they can catch head lice from swimming in a public pool. Swimming pools are known for lots of things, but head lice aren’t one of them. While there is some risk to catching lice from a swimming pool, that risk is very, very low.

Whether you are planning a family vacation or taking your kids to the community pool, here are some things to know about head lice and swimming.

How long can lice survive in a swimming pool?

A louse can close its breathing spiracles for a maximum of four hours! That’s impressive! This means that if a louse is dislodged from a child’s head, it can technically float on the surface and attach itself to a new host. This is rare, but it has happened before.

You might think that chlorinated water would kill a louse, but research shows differently. One study found that submering lice in chlorinated water for 20 minutes only immobilized them. After about a minute, the lice were able to recover.

Even though chlorine does not kill lice, it is very unlikely for these parasites to be spread in public pools. When the host goes underwater, the lice grip firmly to the hair. Realistically, the more common way for lice to be spread in these conditions is by sharing towels and hair brushes.

Should my child wear a swimming cap?

Wearing a swimming cap is actually a great way to prevent the spread of head lice. Your child’s hair will be neatly kept underneath the cap instead of being open to debris and parasites. Plus, we know that many people don’t like the drying effects that chlorine has on the hair, so this knocks out two problems. Of course, you’ll want to avoid sharing swim caps with other children.

What if my child’s head starts itching after swimming?

It takes about a week or two for a louse to mature and lay eggs, so there is no way that your child will catch lice and develop symptoms after one day of swimming. If your child is itching their head, it’s probably a reaction to the chemicals in the water. That said, we recommend combing through your child’s hair after swimming and making sure there are no signs of lice. If you happen to catch a louse right away, this prevents an infestation. Prevention is key.

Lice are interesting creatures, and while they can be spread from swimming in a public pool, it’s uncommon. To be safe, we recommend wearing a swim cap, combing out your child’s hair after swimming and not sharing towels and hair brushes. You can also use a lice repellent spray that contains mint. If you suspect a possible infestation, schedule an appointment with My Hair Helpers today.

Sorry, the comment form is closed at this time.

WHAT ARE HEAD LICE?

Head lice are tiny six-legged insects that are blood-sucking parasites. They live on the scalp of humans. Head lice are the little and wingless insects with a size of sesame seeds that make their home on the human head and spread diseases by sucking the blood from the scalp. Infections and diseases caused by head lice are generally faced by on-going school students and their family members as the head of students come in contact with the head of other students. Contact My Hair Helpers to guaranteed head lice removal services. We are professional head lice removal experts known for our best service and customer support.

WHERE DO HEAD LICE COME FROM?

The evidence for head lice goes back many centuries. Lice was named as the third plague in the Old Testament of the Bible. The shell casings for lice have been found on Egyptian mummies. Live Lice on the head and their eggs can be killed by opting for different lice treatments that are available in different forms such as lotions, shampoos, and creams and these can be used at home without any hassle. It is necessary for the women who are pregnant or breastfeed their babies to take suggestions from a renowned doctor about the risk-free products.

HOW DO WE GET LICE?

In the majority of cases, head lice is passed with head to head contact. A smaller number of cases are passed through brushes and combs and sharing hats. Lice don’t like to leave their food supply unless a warm head is waiting for them.